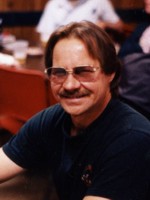 At London Health Sciences Centre, University Hospital on Sunday, March 23, 2008 Barry (Bare) Ward Ellyatt of London in his 55th year.  Daddy Bare to Tameka.  Beloved son of Lorna Ellyatt of Lucan and the late Ward Ellyatt (1982).  Dear brother of Diane Ellyatt and her friend Brian McDonald of London and Patty Mayo of Lucan.  Also survived by several nieces and nephews.  A memorial service will be held at 3 PM on Sunday, April 6, 2008 at the Canadian Legion Branch 540, 136 Market Street, Lucan with Pastor David Ellyatt officiating.  Cremation with interment Granton Cemetery.

Offer Condolence for the family of Barry (Bare) Ward Ellyatt