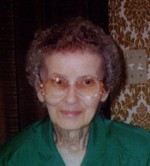 Surrounded by her family, on Friday, August 13, 2010 at CEE Hospital, Petrolia, ON, Audrey Gladys (Densmore) Gardiner, widow of Donald Andrew Gardiner (1983), formerly of Lucan, ON. Born June 12, 1930 in Lynnfield, NB to Forest and Gladys (Anderson) Densmore. She was the last remaining member of her family. Survived by her children; Donna Sleaford of Petrolia, Stearling (Janna) of London, Ivy Steward (Keith) of Boston, MA and Dexter (Rosemary) of London Her grandchildren: Chris Sleaford (Satomi) of Vancouver, BC, Mike Sleaford (Ann) of Killaloe, ON, Angela Brouwers (Mike) of Petrolia, Jessica and Allie Gardiner of Vancouver, BC, Kevin Steward of Boston, MA and Kaitlin and Donnie Gardiner of London, ON. Also survived by great-grandchildren; Jeffery and MacKenzie Sleaford of Petrolia, Samantha Sleaford of Killaloe and Christian and Brooklyn Brouwers of Petrolia and several cousins, nieces, nephews and dear friends. Predeceased by her parents, her sisters Ferne Trafton and Pearl Erskine and brothers Burton, Walter, Marvin and Vincent Densmore.
Friends may call at the Haskett Funeral Home, 223 Main Street, Lucan, on Sunday afternoon 2-4 PM. Friends may also call at the S.O. Mehan Funeral Home 23 Main Street, St. Stephen, NB on Wednesday, 2-4 and 7-9 PM where the funeral service will be held at 1 PM on Thursday, August 19. Interment Baillie Cemetery, Baillie, NB.
Donations to the Neo Natal Intensive Care unit at St. Joseph’s Hospital Foundation, 801 Commissioners Road West, London, ON N6C 5J1, would be appreciated by the family.

Offer Condolence for the family of Audrey Gladys (Densmore) Gardiner