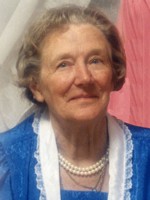 Peacefully at her late residence in Exeter, formerly of Fullarton in her 94th year. Beloved wife of the late Cornelis Driesse (1981). Dear mother of Jannie and Herman Van Wieren of Hensall, Ada and Harvie Crosby of Sebringville, Audrey and Bill Ramsey of Kitchener and Wilma Driesse of Exeter. Dear grandmother of Carolanne and Roger, Audrey and Jeff, Theresa and Kai; Ann and Gary and Kim and Robert; Tracy and Chris and Erin and Lonny; and also survived by 15 great-grandchildren and 5 great-great-grandchildren. Predeceased by brothers Thys and Willem.

Friends may call at the Haskett Funeral Home, 370 William Street, one west of Main, Exeter, one hour prior to the complete funeral service which will be held on Tuesday, January 19th at 11AM. Spring interment Fullarton Cemetery.

Donations to the Canadian Cancer Society, M.S. Society or the charity of your choice would be appreciated by the family.

Offer Condolence for the family of Antje (Van Biert) Driesse