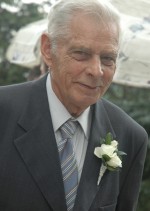 Friends may call at the Haskett Funeral Home, 370 William Street, one west of Main, Exeter on Tuesday 2-4 and 7-9 PM.  The Funeral Mass will be held at Precious Blood Church, 200 Sanders Street West, Exeter on Wednesday, March 30th at 11:30 AM with Father Len Desjardins presiding. Interment Exeter Cemetery. Parish prayers will be said in the funeral home Tuesday evening at 8 PM.

Donations to the Precious Blood Building Fund or the charity of your choice would be appreciated by family.

Offer Condolence for the family of Aloysius (Alois) Van Esbroeck