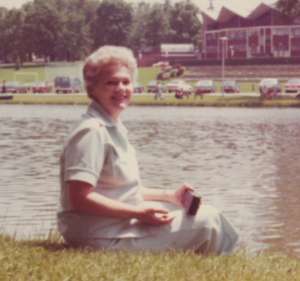 Nan died peacefully at Blue Water Rest Home on September 14, 2021, surrounded by the amazing staff who have cared for her so lovingly for the past few months.

Born in England on February 6, 1924, Nancy Steventon served in the land army during World War II, before marrying David Brash and emigrating to Canada as a war bride. In more recent years, she was officially recognized for her contribution to the British war effort.

Nan always filled her homes with music, both classical and Broadway. Two of her favourite things were Yardley English lavender and Cadbury chocolate. Over the years she found special joy in her many beloved canine companions. In the 1970’s, Nan learned to drive, an activity she loved, and she remained a proud and careful car owner until she was in her eighties. After her many years of long working hours, Nan came to relish peaceful afternoons with a good book, and her music.

A graveside service was held at St. John’s Cemetery, 21557 Richmond Street, ARVA on Monday, September 20th at 11 AM. If you were unable to attend the service, the family invites you to join with them from the comfort of your home. Watch the service at your convenience by visiting www.facebook.com/haskettfh.

Donations to Days For Girls, London would be appreciated by the family.

Offer Condolence for the family of STEVENTON-BRASH: Nancy “Nan” formerly of Grand Bend and London