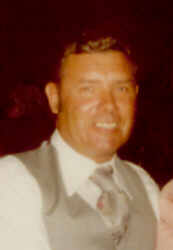 Peacefully at Huronview Home for the Aged, Clinton on Saturday, March 13, 2004 William Earl (Bill) Smith formerly of Exeter in his 77th year. Beloved husband of Geraldine (Prout) Smith. Dear father of Virginia Smith of Huron Park, Jayne and Brian McCann of Mount Carmel and Robert and Cynthia Smith of Kelowna, B.C. Proud grandfather of Skye and Erin; and Blair, Melanie, Lisa and Josie. Dear brother and brother-in-law of June Moore, Gord and Helen Smith all of Exeter, Bonnie and  Ed Saska, Wanda and Ron Hedden all of London, and Sherrie and Ron Broderick of Crediton, Charles and Olga Prout of Michigan, Eva-Mae Prout of London, Glen and Marg Prout of Exeter, Gerald Prout and Noreen of Usborne Township, Ted and  Marie Prout of Alberta, Jack Prout of Parkhill, and Jim and Anne Prout of Centralia. Predeceased by his parents Fred and Ione (Mitchell) Smith, sisters-in-law Eunice Smith and Dorothy Prout and brothers-in-law Murray Moore, Jack Couglin, Mike Cushman and Robert Prout. Cremation. Friends may call at the Hopper Hockey Funeral Home, 370 William Street, one west of Main, Exeter, one hour prior to the memorial service which will be held on Tuesday, March 16th at 1:30 PM with Nancy Corrigan officiating. Interment of cremated remains Exeter Cemetery. Donations to the South Huron Hospital, Exeter United Church or Heart and Stroke Foundation would be appreciated by the family. Condolences may be forwarded through www.hopperhockeyfh.com

Offer Condolence for the family of William Earl (Bill) Smith