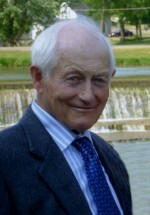 At St. Marys Memorial Hospital on Saturday, March 19, 2011 of Blanshard Twp. in his 87th year. Beloved husband of Marion (Nixon) Thomson for 59 years. Dear father of Keith and Joyce Thomson of St. Marys, Frances Boudrie of Brampton, Lynda and Peter Blom, Cliff and Valerie Thomson, Don and Helen Thomson and Ray and Janet Thomson all of Blanshard Twp. Dear grandfather of Alison and Rich and Andrew and Erin; Veronica and Tiffany; Kristen, Jordan, Lisa and Lauren; Jenna, Scott and Marissa and Melissa, Adam, Will and Breanna. Dear great-grandfather of Katie and Ainsley.  Dear brother and brother-in-law of Kay Morley of Hensall, Florence and Charlie McRobert of Blanshard Twp., Doris Mills of Saskatchewan, Janey Nixon and Ralph and Ruth Nixon of St Marys, Helen and Stan Wyatt of Denfield, Rhoda and Percy Bramhill of Cambridge, Beryl Heighway of Ilderton and Bruce Nixon and Loreen Morley of Ailsa Craig. Predeceased by his parents James and Mary Thomson, son-in-law Don Boudrie, brother George Thomson, sister-in-law Dorothy Hern and brothers-in-law Gerald Hern, Garfield Nixon, Hube Mills, Stan Burnett, Robert Nixon and Doug Heighway. Friends may call at the Haskett Funeral Home, 223 Main Street, Lucan on Tuesday from 2-4 and 7-9 PM where the funeral service will be held on Wednesday, March 23, 2011 at 11 AM with Paul Vollick officiating. Interment Granton Cemetery. Donations to Granton-Wesley United Church or the St. Marys Memorial Hospital would be appreciated by the family.

Offer Condolence for the family of William (Bill) James Thomson