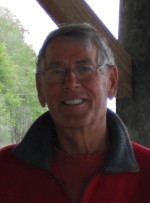 Peacefully, at South Huron Hospital, Exeter on Thursday, April 28, 2011 of Exeter and formerly of Hensall in his 76th year. Beloved husband of the late Eudora (Hyde) Caldwell (2007). Dear father of Terry and Heather Caldwell and Jeff Caldwell and Debbie and her children all of RR 2 Hensall. Dear grandfather of Tristen, Ryan, Jake and Abbey. Dear brother of Harold and Wilma Caldwell of Hensall, Shirley Damant of Hamilton and Jean Tozer of London. Dear son-in-law of Lillian Pym of Exeter. Predeceased by his brother Ronald Caldwell.

Friends may call at the Haskett Funeral Home, 370 William Street, 1 west of Main, Exeter on Sunday 2-4 and 7-9 PM where a memorial service will be held on Monday, May 2nd at 11 AM with Bob Heywood officiating. Cremation with inurnment Exeter Cemetery.

Donations to the South Huron Hospital Foundation or the LHS Foundation (Regional Cancer Program) would be appreciated by the family.

Offer Condolence for the family of Robert (Bob) Earl Caldwell