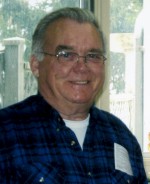 Peacefuly, at home with his family at his side on January 19, 2010 Raymond Hayter of Lucan in his 72nd year. Beloved husband of Cora Hayter. Dear father of Tracy and Doug Proudfoot of London, Jim Hayter of Exeter and Denise and Doug Marshall of Shipka Also survived by 6 grandchildren and 1 great-granddaughter. Dear brother and brother-in-law of Ken and Louise Hayter of Crediton, Kathy Hayter of Toronto, June Hayter of Alberta, Laura Prekup of St. Marys, Doris and Jim Goeble of Michigan, Gary and Linda Hayter of Lucan, Audrey and Gord Bannister of Thorndale and Janice and George Dauncey of Lucan. Predeceased by a son Terry (1980) and a daughter Kim (2005), grandson Samuel Marshall (2007) and brothers Floyd, Ron, Jack and Ross.

Friends may call at the Haskett Funeral Home, 223 Main Street, Lucan on Thursday 2-4 and 7-9 PM where the funeral service will be held on Friday, January 22nd at 1:30 PM with Carole Nunns officiating. Interment St. James Cemetery, Clandeboye.

Donations to the Royal Canadian Legion, Branch 540, Lucan or the Canadian Cancer Society would be appreciated by the family.

Offer Condolence for the family of Raymond Hayter