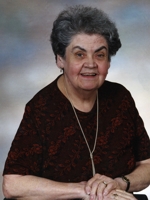 Frayne, Marion Jean (Brown) of Exeter passed away peacefully at University Hospital, London on Sunday, December 28, 2008 in her 84th year. Beloved wife of the late Stan Frayne (2005) and the greatest mother to David and his wife Cathy Cade and Janice and her husband Bill Morris of Seaforth and grandmother to Jim and Pat Morris. Special grand mom to Andrew (Tina) and Brandon (Jessica) Palmer and a great grand mom to Caden. She will be fondly remembered by her sister and best friend Eva Prout and many nieces, nephews, cousins and friends. She was predeceased by her parents Fraser and Madeline Brown and by her brother Charles. Marion was a life member of the Ladies Auxiliary of the Royal Canadian Legion, Branch #167, a member of the Hurondale Women’s Institute, a former 4-H leader and a member of Exeter United Church. Marion was raised in Crediton, worked for the Red Cross during WW II, attended Westervelt College and then was employed by Webster Air, Ontario Hydro and then for 51 years with her husband at Stan Frayne’s General Store. Friends may call at the Haskett Funeral Home, 370 William Street, Exeter on Tuesday 2-4 and 7-9 PM. A memorial service will be held on at the Royal Canadian Legion, R. E. Pooley Branch #167, 316 William Street, Exeter on Wednesday, December 31st at 11 AM with Rev. Paul Ross officiating. Cremation with interment Exeter Cemetery.   Donations to South Huron Hosptial, Royal Canadian Legion, Branch #167, Exeter or the charity of your choice would be appreciated by the family.

Offer Condolence for the family of Marion Jean (Brown) Frayne