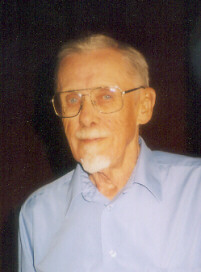 Lloyd Lister Thorsley in his 88th year on Sunday, July 20, 2003, peacefully and surrounded by his loving family at his residence in Ilderton. Lloyd was born July 12, 1916, on a homestead near Ryley, Alberta. He was one of two sons, the only children of Alfred and Mabel Thorsley. His mother was a school teacher from England and at that time still very much a member of the British Empire. It was in the middle of WWI when David Lloyd George was Prime Minster and explains where he got his first name. Lloyd’s father, the son of Norwegian immigrants, was born in Iowa and moved to Canada to get the free land available for homesteading. They struggled to cultivate 320 acres of land to raise horses, cows,chickens, pigs, as well as dogs and cats. Lloyd was very proud of his expertise with the horses they were so dependent upon. Their land supplied the wood that needed to be cut and split into stove lengths for warmth. Their water came from a well they dug themselves. They raised their own meat and grew their own vegetables. All this before indoor plumbing. His early schooling was in a one-room country schoolhouse where the teacher taught all subjects from grades one to eight. He traveled to Edmonton 40 miles away to complete high school. After a stint in military service in WW II, he  obtained a degree in electrical engineering from the University of Alberta. Lloyd, with his wife Dot and eight children, moved east to work for Westinghouse in Hamilton where they lived until 1957 when he joined at the new plant in London. His career was interesting and satisfying involving dealing with electrical utilities all across Canada and in a number of foreign countries. Although he worked in London, his residence was always in Ilderton where he had a keen interest in community affairs. He was instrumental in the development of the Ilderton Curling Club. He was keenly interested and supportive of the community of Vintage Green where, among his many contributions, he developed their constitution. His great interest in genealogy culminated in the publication of his memoirs. He lived a good and productive life. Lloyd was predeceased by his wife, Doris Catherine Tredway (1991), and daughters-in-law Patricia Ferguson and Dr. Sheila Falona. He is survived  by nine children and their spouses: Alfred and Josephine Thorsley, Blaine and Pat Thorsley, Penny and Tom Brown, Trudy and John Reynolds, Dan Thorsley, Kathy and Keith Rainford, Jeanne and Bill Treurniet, Betty and Doug Poole, Jim Thorsley and Kathy Taylor. He leaves twenty-three grandchildren and eighteen great grandchildren. He will be sadly missed by many friends in Ilderton.

Friends may call at the C. Haskett and Son Funeral Home, 223 Main Street, Lucan on Wednesday, July 23rd 2-4  p.m. followed by a celebration honouring his life at the Vintage Green Community Centre, Ilderton from 6 to 8 p.m.  All are welcome. In lieu of flowers, donations to St. Joseph’s Hospital Foundation would be appreciated.

Offer Condolence for the family of Lloyd Lister Thorsley