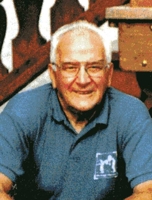 At Queensway Nursing Home, Hensall on Wednesday, October 29, 2008 Lawrence E. Russell formerly of Exeter and Russeldale in his 82nd year. Dear father of Deborah and Dan Griffith of Invermere, B.C., John and Dianne Russell of Lambton Shores, Grace and Richard Strachan of Kansas and Mary Russell of London. Dear grandfather of Luke Griffith, Genevieve and Clay Verge, Rachel Griffith, Abby Russell-Henry and Andy Henry, June Russell, Arden and Derek McLean and great-grandfather of Owen and Emily Henry, Eve McLean and Kyla Verge. Dear brother and brother-in-law of Clarence Russell of Kamloops, B.C., Wesley and Agnes Russell of Seaforth, Kathleen and Ken McLeod of Hamilton, Roy and Shirley Russell of Russeldale and Florence Russell of Toronto. Special friend of Marg Diechert of Zurich. Also missed by several nieces and nephews. Predeceased by his parents Ethelbert and Florence (Dow) Russell, sisters Wilhelmina Campbell and her husband Robert and Marion Miller and her husband Frank, sister-in-law Audrey Russell, nephew Murray Russell and niece Margaret McClymont. Friends may call at the Haskett Funeral Home, 370 William Street, 1 west of Main, Exeter on Monday 2-4 and 7-9 PM where the funeral service will be held on Tuesday, November 4th at 11 AM with Rev. Susan Moore officiating. Interment Roy’s Cemetery. Donations to Blessings-Community Store and Food Bank, Zurich would be appreciated by the family.

Offer Condolence for the family of Lawrence E. Russell