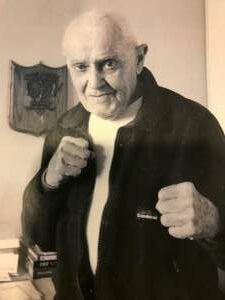 Early on a Wednesday morning in summer a feisty featherweight reluctantly threw in the towel. When the final bell rang Jimmy had boxed his heart out through all 12 rounds. That was his style, stick it out, aim for the win, don’t give up and never hit below the belt.

He was only two when his dad, Stanley Hosking, newly immigrated from New Liskeard, Cornwall died in rural Perth County. Two years later, his mum, Freda remarried a dairy farmer outside of St. Marys named Percy Switzer. Jimmy was a small kid but farm work made him strong and fit. He had good looks on his side and he was clever. He told us how his feet didn’t touch the floor when he started high school at St. Marys Collegiate. He was 12. A couple of years later he held the school record in gym for most consecutive push ups. We like to think that record still stands : )

He left home at 16 and paid his board while attending Beale Tech in London with money won on the prize fighting circuit in Ontario and Michigan. He got a standing ovation once at Maple Leaf Gardens in Toronto and, he said, the fight was called a draw!

He fell in love with Joanie Bell, a journalist’s daughter from St. Marys, in 1947. They married 2 years later and became parents almost 9 months to the day. By 1954, with 2 kids, Jane and Steve, and a wife to support, he needed two jobs to get ahead. Even though he was a trained draftsman, Jimmy was a natural salesman. He loved people of every sort, he laughed easily and often. A good day was on the road in a smooth ride making new contacts (he had a penchant for nice cars and was beginning to be able to afford one). He sold everything from vacuum cleaners and insurance to real estate and farm equipment. He had his own businesses and farmed on the side. He raced Standard Bred horses and mucked out stalls before breakfast.

He taught drafting at night school in Stratford and passed his pilot’s license about the same time. And there were dogs, lots of dogs and cats, and parties. The parties were raucous, filled with good food, abundant spirits, crazy laughter and old friends. They kept us kids awake into the wee hours.

Jimmy was a great dad. He taught his kids determination, resilience and stamina. He was a peace keeper. He showed us how to laugh at ourselves.

Joanie died 8 years ago and Jimmy took it pretty hard but the day he entered palliative care at Jessica House in Exeter, he had the staff in stitches. He was “all used up” as his mother would say but they made him welcome and comfortable and he found the rest and peace he needed. He drifted away quietly in the night, likely dreaming of his dogs. And so he followed them home.

Special thank you to Dr. Jadd, Jessica’s House, and the Exeter Villa for their care and compassion.

Donations to Jessica’s House would be appreciated by the family.

Offer Condolence for the family of HOSKING: James Stanley of Exeter and formerly of St. Marys