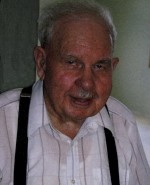 Passed away peacefully at LHSC-University Hospital, London on Tuesday, June 7, 2011 of Lucan and formerly of Whalen Corners in his 93rd year. Beloved husband of Audrey (Grose) Hodgins for 68 years. Dear father of Berton Hodgins of Lucan and Sharon and Fred Mardlin of Denfield. Dear grandfather of Louise and John Broeders of Bryanston, Lynn Mardlin and Chris Yule of Lucan and Lisa and Dave Vandewalle of Dublin. Dear great-grandfather of Adam, Nicholas, Emily, Adrianna, Cole; Tess; and Jeromy. Dear brother of Gwen Grose of Lucan, Vincent Hodgins and Genevieve Worrall both of Denfield and brother-in-law of Gloria Hodgins and Andy and Phyllis and Don O’Neil all of Lucan and Dolly Hodgins of London. Also missed by several nieces and nephews. Predeceased by his infant son Earl, brothers Austin and Lawrence Hodgins and brothers and sisters-in-law Lillian Hodgins, Lyle Worrall, Calvin and Marjorie Grose, Charlie Grose and Kathleen Grose.

Friends and family may call at the Haskett Funeral Home, 223 Main Street, Lucan on Thursday 2-4 and 7-9 PM where the funeral service will be held on Friday, June 10th at 2 PM with The Rev’d Andreas Thiel officiating. Interment St. James Cemetery, Clandeboye.

Offer Condolence for the family of Hamilton (Ham) Whitlock Hodgins