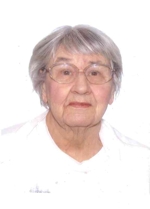 Peacefully, at Queensway Nursing Home, Hensall on Sunday, April 15, 2012 of Centralia in her 89th year. Beloved wife of the late Allan Richard (1960). Dear mother of Lynne and Jim Onn of London and Laurie and Marten Dykstra of Exeter. Dear grandmother of Kathilyn and her husband James Allewell; Jason and his fiancée Erin Steer and Janelle and her friend Chris Armstrong. Dear sister-in-law of Alma Richard of London and Maida Gaiser of Exeter. Also survived by several nieces and nephews. Predeceased by her parents Wesley and Blanche Webber, brother-in-law Don Gaiser and sister-in-law Marjorie Bailey and her husband Lou.

Friends may call at the Haskett Funeral Home, 370 William Street (1 street west of Main), Exeter one hour prior to the funeral service, which will be held on Wednesday, April 18th at 11 AM with Rev. Paul Ross officiating. Interment Exeter Cemetery.

Donations to South Huron Hospital Foundation or the Exeter Cemetery Expansion would be appreciated by the family.

Offer Condolence for the family of Gretta Jean (Webber) Richard