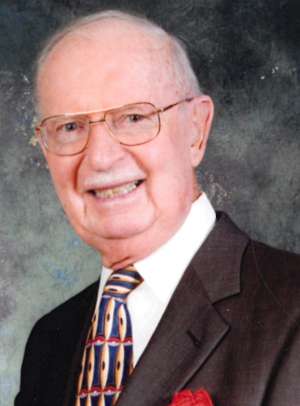 Murray passed away peacefully in his home surrounded by his faith and love in his 102nd year. He was born in Zone Township to Myrtle and Herbert Greene who raised a family of three sons and a daughter.

After finishing school, he began a lengthy working life, staring at a gas station on Wabash. He and his life-long friend, Allan Badder bought a Ford Model T and attached a sign with the re-assuring ‘Don’t cry girls, we’ll be back’. Murray moved to Windsor to work at Ford of Canada. He took a leave of absence from Ford to join the army (RCL I regiment) in 1942. His friend, Allan, was in a serious accident that year, and Murray (on AWOL) visited him in Chatham. One of Allan’s nurses in training was a beautiful, vivacious woman named Rhea. On returning to the army, Murray was sent to Britain. For the next four years, he fought in France, Holland, Belgium and Germany.

Upon returning home in 1946, he visited his friend, Allan, and re-united with Rhea whom he married in 1948. Together they started and co-owned Greene’s Variety, first in Palmerston and then in Exeter in 1957. They were famous for their friendliness and their fresh peanuts. They sold the business in 1975.

Murray began serving his community early in his life first of all as a Councillor and then as a member of the P.U.C. Murray and ‘Ted’ Pooley for years traded the Chairmanship of the Commission back and forth every two years, until after 30 years, Murray retired. He served his church (Trivitt Memorial) as People’s Warden, Rector’s Warden, Superintendent of the Sunday School. Murray served on the Executive of Legion Branch 167 for years, receiving his 70 years pin in November.

Every March 17, he would dress in a green curly wig with a top hat and tails and go to the banks, post office and stores spreading Irish cheer. He was the kindest and gentlest of men, and always had a beautiful smile for everyone as he walk around town with his green hat. .

Honours flew his way. He was awarded the France’s prestigious Legion of Honour for helping to free the French during the award. The award came with the title of Knight allowing him to use ‘Sir’ before his name. On his 100th birthday he was feted with a drive-by organised by the Legion members as all other celebrations were cancelled because of COVID.

Murray was predeceased by his beloved wife Rhea (Rickard) in 2019, son-in-law Claude LaFond (2017), and grandson, CWO Robert Keating (2019), his parents Herbert and Myrtle (Logan) Greene, step-father Percy Greene, brothers Gerald, and Mervin and their spouses and his sister Bernedas “Buddy” and her husband. He is survived by his daughter Bonita “Bonnie” LaFond of Exeter and Meaford, son David of Cobden, Ontario, grandson Trevor and Josie Keating of Nanaimo, BC, great-grandsons Tristen, and Alex Keating and their mother Valérie of Kingston, great-granddaughter Jessica Keating and Mike of Rothsay, NB, great, great-grandsons Milo, Elliott, and Treyson, grandson Aaron and Alexandra Greene and great-grandson Amaré, granddaughter Kaitlyn Haley and James, great-grandson Padraig of Stittsville, ON. He is remembered with great love and affection by numerous nephews, nieces, cousins and friends from British Columbia to Prince Edward Island.

A Legion Service to honour Murray will be held at Haskett Funeral Home, 370 William Street, EXETER on Wednesday evening at 7:30 PM.

Public visitation will be held in the funeral home on Thursday from 2 – 4 and 7 – 9 PM. Registration is required and appreciated. Please click “Register Now” below, to register.

For those unable to join in person, the family invites you to join with them from the comfort of your home. Stream the service live or at your convenience by visiting www.facebook.com/haskettfh.

Donations to the Royal Canadian Legion, Branch 167 (Exeter Legion), or Trivitt Memorial Church, Exeter would be appreciated by the family.

Offer Condolence for the family of GREENE: Sir Murray Arthur of Exeter