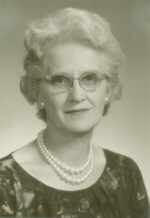 Peacefully at the Exeter Villa, on Sunday, February 13, 2005, Gladys (Dew) Sims, formerly of Hurondale, in her 100th year. Dear wife of the late William (Bill) Sims (1959). Beloved mother of Audrey Bentley, and Evan and Edna Sims, all of Exeter. Predeceased by a daughter Labelle Schmetzer (2004) of Kitchener. Dearly loved by her grandchildren, Katherine Bentley of Exeter; Lori Sims and her husband, Paul D’Auvergne of Oakville, Jane Sims and her husband, Chris Harvey of London and Bob Sims of Exeter and his girlfriend, Brenda Siemon of Dublin. Also survived by ten great-grandchildren and seven great-great grandchildren. Glad was also predeceased by her sister, Myra (1996) and her husband, Clarence Heywood (1976); her sons-in-law, Mervin Schmetzer (1995) and Walter Bentley (2001); her grandchildren, John Schmetzer (1994), Marion (Bentley) Carter (2002), and Steven Sims (2002); and great-granddaughter, Tina Rebelos (1999). Born Gladsy Alice Dew in Usborne Township, on September 4, 1905, Glad lived for almost a century, always in the Exeter area. She loved gardening, quilt making, sewing and above everything else, her family. She was a long time member of the Hurondale Women’s Institute and a faithful member of Trivitt Memorial Anglican Church. She remained strongly independent well into her 90s. Friends may call at the Hopper Hockey Funeral Home, 370 William Street, 1 west of  Main, Exeter on  Monday evening 7 ? 9 PM where the funeral service will be held on Tuesday, February 15 th       at 2PM with The Rev. Father Bill Ward officiating. Interment Exeter Cemetery. Donations to the charity of your choice would be appreciated by the family.

Offer Condolence for the family of Gladys Alice Sims