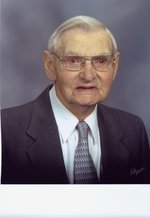 Peacefully, surrounded by his loving family members, at Exeter Villa, on Sunday, November 29, 2009, Earl Daniel Flaxbard, of Zurich, passed away in his 94th year. Beloved husband of the late Anne (Oesch) Flaxbard (2002). Dear father of Ruth Ann of London, Shirley and Ross Cooper of Ingersoll, Gary and Bette of Kitchener and Paul and Cathy of Georgetown. Loved by his grandchildren Jonathan and Christine Cooper, Lori and Bill Warner, Geoffrey and Yuri Flaxbard, Gillian and Ben Toriumi, Megan and Patrick Rusnak, Kevin Flaxbard and Shawn Flaxbard and his great-grandchildren Jacob Warner, Katelyn Cooper, Matthew Cooper, Shaye Rusnak, Kianna Toriumi and Ethan Toriumi. Dear brother-in-law of Margaret Henderson and Mae and Harry Keep. Also survived by several nieces and nephews. Predeceased by his parents Henry and Bertha (Brenner) Flaxbard and his siblings Vera, Greta and Bill.

Memorial contributions may be made to St. Peter’s Lutheran Church, Lupus Ontario or a charity of one’s choice.

Offer Condolence for the family of FLAXBARD Earl Daniel of Zurich