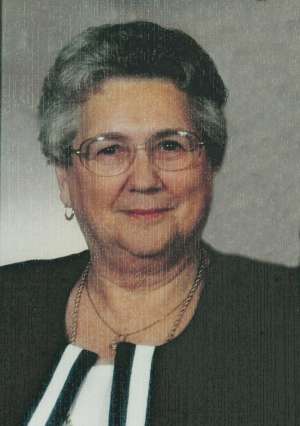 Passed away peacefully at Brierwood Gardens, Brantford, on December 9, 2020 at the age of 94. Beloved wife of the late Norman J. T. Ferguson (2003). Adored mother and mother-in-law of Patricia Jean Benett of Brantford, and Ray Wanzo of Oakland. Dear grandmother of Ron Vercruyssen of Brussels, Carrie and Will King of Tobermory and Edward Culham of Kitchener. Great-grandmother of Brooklyn and Sam Barlow of Listowel, Ronnie Vercruyssen of London and Athena King of Tobermory. Dear sister-in-law of Roy Ferguson of Exeter. Also survived by several nieces and nephews. Predeceased by her daughter Doris Ferguson (2016), grandson Daniel John Vercruyssen (1988), her siblings Wilhelmine and Oliver Jaques, Kathleen and Mike Hodgert, Jean and Wilmer Ferguson, Grace and Merv Hodgert, Marie Ferguson, Peggy and Wilmer Ferguson, and nephews Ken Ferguson and Ray Benneweis.

A private family funeral service will be held on Tuesday, December 15th at 12PM. Interment Exeter Cemetery. Though the service is private, the family invites you to join with them from the comfort of your home. Stream the service live or at your convenience by visiting http://www.facebook.com/haskettfh. Haskett Funeral Home, Exeter entrusted with arrangements.

Offer Condolence for the family of FERGUSON: Olive Carrie (Schilbe) of Exeter