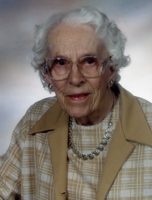 At Exeter Villa on Saturday, June 7, 2008 Estelle R. (Bartlett) Chalmers of Exeter in her 97th year.  Beloved wife of the late Alexander G. Chalmers (1993).  Dear mother of Don Chalmers and Nancy Radin of Hamilton and Beth and John Komi of Deux Montagnes, Quebec.  Predeceased by Norman and Donald Bartlett.  Friends may call at the Haskett Funeral Home, 370 William Street, 1 west of Main, Exeter one hour prior to the funeral service which will be held on Tuesday, June 10th at 1:30 PM with the Rev. Paul Ross officiating. Interment Exeter Cemetery. In lieu of flowers, donations to the Exeter Legion would be appreciated by the family.

Offer Condolence for the family of Estelle R.  (Bartlett) Chalmers