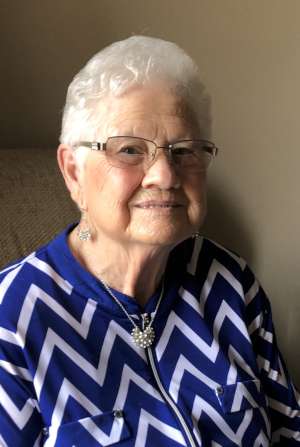 Passed away peacefully at Blue Water Rest Home on Sunday, September 18, 2022 of Zurich at the age of 87. Beloved wife of the late Harold Dietrich (2017). Cherished mother of the late Kevin Dietrich (2015), Randy and Marlene Dietrich of Grand Bend, Jim and Denise Dietrich of Zurich, Lorraine and Jeff Forrester of Zurich, Theresa and Stephen Finkbeiner of Crediton, and Doug Simpson-Dietrich of London. Proud grandma of Derek, Stephanie, Jon-Luc; Jordan; Megan, Justin, Dillon, Ashley; Jordan. Great-grandma of Jaxson, Dean, Caleb, Ava, Bryson, and Jonah. Dear sister-in-law of Marie Sopha, Irene McCann (Grant), and Dianne and Lawrence Becker. Fondly remembered by several nieces and nephews. Predeceased by her parents Adolph and Pricilla (Ducharme) Sopha and her many siblings and their spouses.

Doreen will be remembered for her many years of being the Fuller Brush lady. It was an excuse for Doreen to get out and about and socialize with old and new friends around the community. In her spare time, she loved to bowl or would be sitting at a table playing a game of cards.

A private family funeral service will be held in the funeral home. Interment St. Boniface Cemetery on the Bronson Line. A recording of Doreen’s service will be available on Tuesday, September 20th by visiting www.facebook.com/haskettfh.

Donations to the Blue Water Rest Home, or the Canadian Cancer Society would be appreciated by the family.

Offer Condolence for the family of DIETRICH: Doreen (Sopha) of Zurich