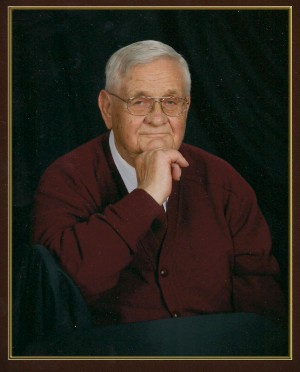 Peacefully, at South Huron Hospital on Tuesday, March 22, 2016 Earl Deichert, in his 95th year. Loving husband for 63 years of Phylis (McBride) of Zurich, and dear father of John of Angus, Susan of Ottawa, and the late Elizabeth (2007). Sadly missed by brothers Claire Deichert of Zurich, and Edward Deichert of Wingham, sisters Dorothy Elligsen of Mitchell, and Margaret L. Deichert of Zurich, brothers-in-law and sister-in-law Wesley McBride, and John and Mary McBride. Predeceased by parents Victor and Josephine (Kalbfleisch) Deichert, sisters Helma Deichert (1925), Edith Hohner, and Laura Pepper, and brothers- and sisters-in-law Harvey Hohner, Clifford Pepper, Edgar Elligsen, Margaret J. Deichert, Elaine Deichert, Hugh McBride, Marjory McBride, Keith McBride, and Elaine Colquhoun. Survived by his uncle Albert (Marie) Deichert and 25 nephews and nieces. Earl’s early life was spent farming. Music was his passion: learning to play the fiddle and later the bass fiddle. He was a member of Desjardine’s Orchestra in the 50s and 60s, helping to provide music for many marriage receptions. In 1967 he was recruited by the Zurich Centennial Band with the task of beating the large drum. He also enjoyed his time with the Alpenaires, a German band. Between musical engagements, he worked as a labourer at several different places around Zurich. His hobby was carpentry work in his wood shop.

Donations to The Arthritis Society or St. Peter’s Lutheran Church would be appreciated by the family.

Offer Condolence for the family of DEICHERT: Earl of Zurich