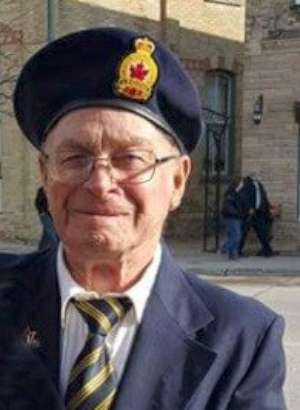 Peacefully at Alexandra Marine and General Hospital, Goderich on Wednesday, August 31, 2022 of Clinton, in his 95th year. Cherished father of Jim and Betty Dickey, and Dianne Dickey. Grandfather of Cassandra and his great-grandchildren. Dear brother and brother-in-law of Janice Adkins, Donald and Diane Adkins. Fondly remembered by many nieces, nephews, and his special friend Wendy. Sadly missed by Dave Mustard and his wife Cathy. Predeceased by his parents Henry and Violet (Fuss) Adkins, and siblings Howard and Joyce, Wilmer and Grace, Stewart, Shirley and Ernie Powell.

Jack will be remembered for his love of travelling and his ability to tell stories about his life adventures to anyone that would listen. He and his brother Howard were proud to have started the co-op in Hensall. Back in the day, he enjoyed delivering the milk around the countryside.

Donations to the Alzheimer Society Huron Perth would be appreciated by the family.

Offer Condolence for the family of ADKINS: Jack of Clinton